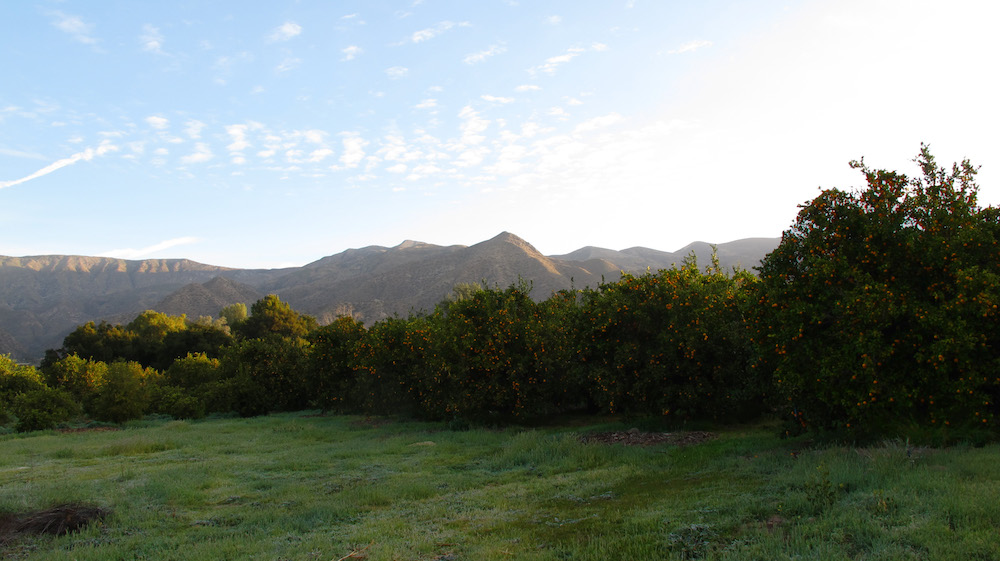 Momentarily bucolic — dawn at the orchard.

Kishu season was kind of a project – we got that lovely write-up in the Wall Street Journal in mid-December, right as we were starting a season where the crop size was a fifth of the previous year’s. We knew we didn’t have the fruit to serve all the new potential customers, and we had to say No to thousands of would-be customers who signed up – a stressful time for sure.

But it’s Pixie time now, and a different story. We will have enough organic Pixies for all, and as some of the other fruits that we grow come ripe we will add them in to our product list. There will be Hass avocados, Oro Blancos, and a couple of mixed fruit options. 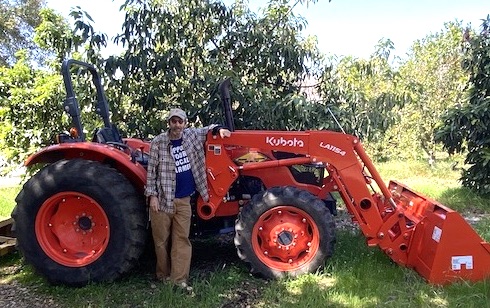 Jim with his new tractor. Shiny and clean for a couple of days.

On the farm – the new tractor that we bought in December arrived this week, finally, and Mike immediately put the little gannon box on the back and started preparing the ground for his garden.

We fertilized all the trees in late February – early March, to give them food to grow new leaves during the spring growth spurt.

The drought continues to reign supreme here in Ventura County — so far this rain year we’ve gotten a total of about 6″, and we’re halfway through the last month that might have any chance of rain. (There is no “typical” rain year here, but the annual average is 14″.) Lake Casitas, the source of our water, is at a hair under 39% full, which is not good. We will probably have to turn off the water on some of the least productive or least desirable trees in order to make it through the year.

One of the ways we deal with the drought is by obsessively monitoring our irrigation. We use a device called an atmometer that measures evapotranspiration, to know when and for how long to irrigate, and we walk the irrigation lines every time we irrigate, looking for leaks, hose damage caused by mischievous young coyotes, blocked emitters – anything wasting water or causing individual trees not to receive their share. That irrigation season is about to start in earnest, where we will be watering each block of trees between weekly and every 10 days or so.

This being my first blog post, I’ll see if I can’t update it regularly with farm news.

thank you for reading!